The Citroen C5 Aircross was a great holiday car. It felt at home on a motorway cruise, and really delivered on its promise of comfort. It devours miles in a calm and unflustered manner, and left us all feeling refreshed after a coast-to-coast road trip.

Family holidays. Stressful in the build-up, and hopefully relaxing when you arrive. That was certainly the case recently, when the Milne clan decamped to north Devon for a week.

The day before we headed off, I noticed that the Citroen’s near-side rear tyre was looking a little low. A quick examination showed a screw had punctured the tread; my worst fears were confirmed when my local fitter said it wasn’t repairable but did, remarkably, have the correct Michelin tyre in stock. At 4.45pm. On a Friday. That’s lucky. 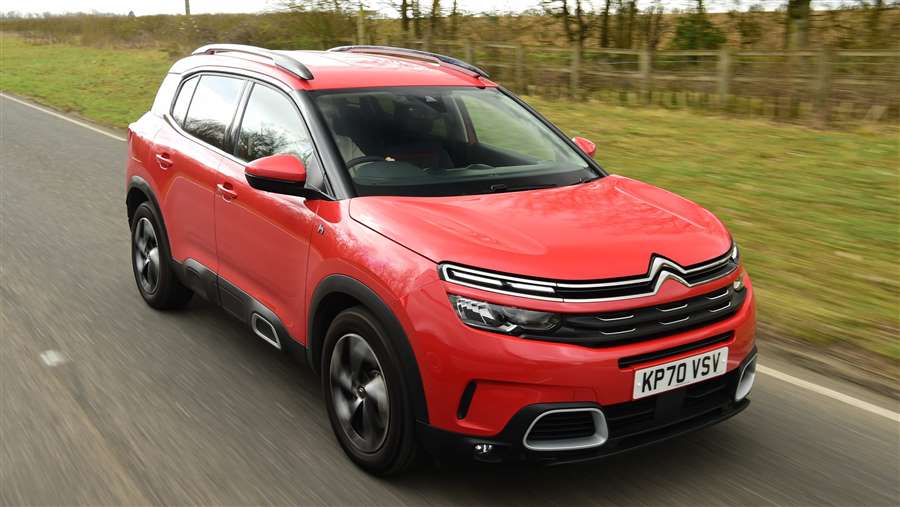 We set off, only to be confronted by an unhappy tyre pressure monitoring system. It turns out that the replacement tyre’s valve had been damaged during fitting, and with a new one installed, all was good.

Otherwise, the trip really couldn’t have gone better, aside from Google Maps sending us on the A303 past Stonehenge, and straight into the inevitable traffic jam.

The C5 Aircross has revealed itself to be at its very best on a long motorway jaunt. Its Advance Comfort seats are cosseting, and the ride, which can be choppy around town, is gloriously smoother at speed. The 1.6-litre four-cylinder engine is quiet, only becoming harsh when accelerating hard, but there’s precious little wind or road noise. It could well be stunning on the French autoroutes, when restrictions ease and all Brits can cross the Channel to visit and travel freely.

Visibility is very good indeed, and aside from the usual grumbles my kids were happy and comfortable; even more so when we arrived. It was then that they could really enjoy the view out, spotting the myriad grazing animals that scatter that part of the world. I was also glad of that good visibility when carving our way through the narrow roads of the county’s chocolate-box villages. 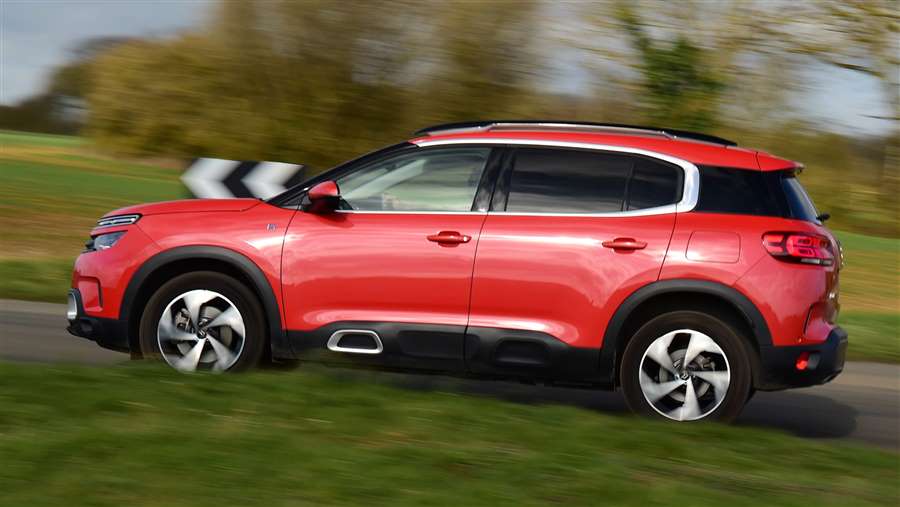 It’s here that the C5 Aircross really shone. It’s as big a car as you’d really need on these roads; larger SUVs feel just too big for the conditions. And it’s as funky and striking as you’d want, too, more than up to the job of standing bumper to bumper with the brightly coloured VW Transporters which seem to account for every second vehicle in Devon’s coastal towns. In fact, strapping a surfboard to the roof might transform the Aircross into a super-cool surf wagon.

The holiday was the first time I’d really travelled a long distance in it. And while fuel economy has sat at around 34mpg without regular charging, it travelled 41 miles for every gallon of unleaded on the motorway – not bad considering it was fully loaded – against a mainly round-town economy of 35.3mpg. For the next report, I’ll see what it’s capable of with more frequent charging.

The long and often severe gradients around Devon let me make the most of the Aircross’ regenerative brakes. On many of the longer 10-15 per cent descents, it was perfectly possible to maintain the speed limit without touching the brake pedal, although the ability to vary the amount of regen would be handy. Nevertheless, it’s very satisfying to see the charge meter climb using nothing but otherwise-wasted energy.

I had expected the boot to struggle with our luggage, which is more of a reflection of us not travelling light than the Citroen’s 460-litre capacity. To maximise luggage space we ditched the charging cable, and used the removable tray it’s stowed in to carry sandy shoes and muddy boots. 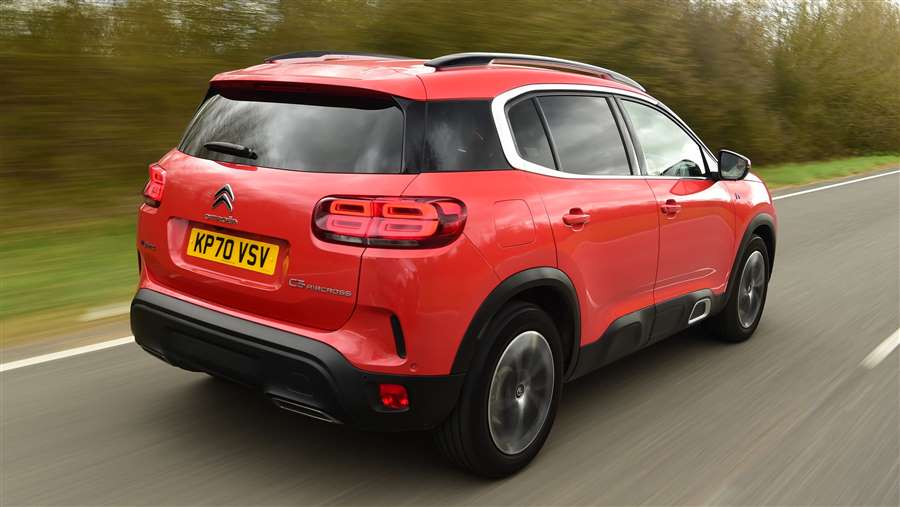 Our plug-in hybrid SUV brings the promise of superb economy

Platform sharing. It’s now commonplace for cars to share the same basic chassis toolkit. But that doesn’t necessarily mean everything becomes the same. Sometimes, it allows brands the freedom to take a few risks.

It’s these quirks that I’ve been enjoying most with the Citroen C5 Aircross over the past few months. I love the off-beat styling, the bold paintwork and the funky interior. In a world of Russian-doll styling and monochrome paint – as demonstrated above – it’s a breath of fresh air.

It’s the complete reverse of the Vauxhall Grandland X I ran back in 2018, a car that, like the C5 Aircross, is underpinned by Stellantis’s EMP2 platform. That car was conservatively styled in the extreme, and the fuel economy didn’t impress – two criticisms that can’t be levelled at the Volcano Red plug-in hybrid you see here.

The £35,000 asking price isn’t too bad either, especially when the C5 Aircross undercuts hybrid versions of both the Peugeot 3008 and DS 7 Crossback.

So what do you get for your money? Well, as standard, my Flair model (since renamed as Shine) gets the City Camera Pack with a combination of displays, including a handy composite bird’s-eye view, a fully digital 12.3-inch instrument display, AEB with modes to detect pedestrians (not yet put to the test, fortunately), and traffic sign recognition. It also has Apple CarPlay and Android Auto, which is a very good thing indeed, because the touchscreen interface isn’t the most intuitive or responsive. 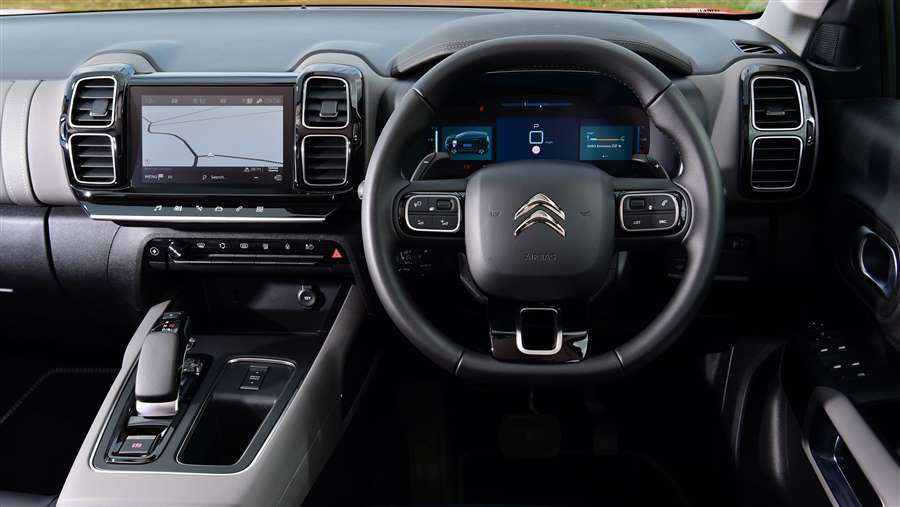 Of more importance to the young-family car driver are the buttons to disable the rear window switches and to activate the child locks, which puts an end to the need to flick fiddly switches in the door jambs.

The business end of charging works well. There’s a 6.6kW onboard charger that means a full battery top-up takes less than two hours, something that’s good for a WLTP-certified range of 33-40 miles. In reality, and mostly cool weather conditions, I’ve been covering more like 23 miles.

The charging flap is on the passenger-side rear wing, which isn’t ideal because it means I have a slightly tricky reverse parking manoeuvre to execute to get close to my Pod Point wallbox.

Naturally, with any kind of PHEV your efficiency may vary. Early on, and with a full battery charge, the trip readout was indicating 100mpg-plus economy figures. With the battery depleted, it’s settled to 33.6mpg on mostly round-town journeys. So I’ll be hooking it up to my wallbox on a regular basis to try to improve those figures.

All the usual drive modes are available; it’ll default to Electric when the battery has a slug of charge, and Hybrid when it doesn’t. Sport mode is largely redundant, but the charge hold function is handy for ensuring electric-only driving in towns and cities. 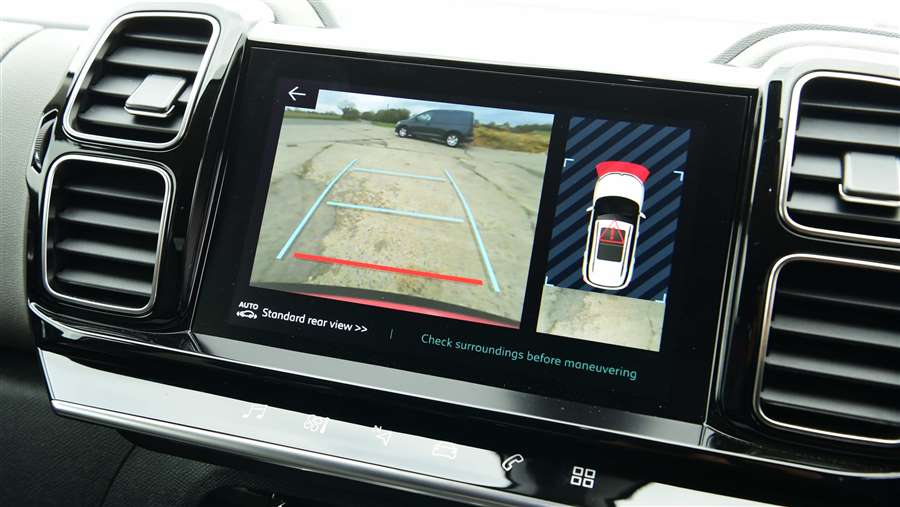 Acoustically insulated front side windows are fitted to all hybrid models, and they certainly help to make electric-only progress really very quiet indeed. When the 1.6-litre four-cylinder engine kicks in, it does so very smoothly, although it gets rather thrashy if you come anywhere close to replicating the 8.7-second 0-62mph time.

While the Aircross doesn’t offer one-pedal driving, an enhanced brake regen mode is accessed by a tug of the gearstick. It’s not perfect though: the gearlever is on the left side of the transmission tunnel – a slight stretch away and likely a result of the switch from left to right-hand drive.

That aside, there’s a healthy amount of storage: wide door bins, cubbies ahead and to the side of the gearlever, and vast space between the front seats for a large pack of anti-bacterial wipes, bottles of alcohol gel and rubber gloves – items that have come to define the past 12 months.

Mercedes
Mercedes-Benz EQE Will Be Smaller Than The E-Class