Despite the popularity of new SUVs, the fact is that not everybody wants to sit up high in a quasi-off-road station wagon. And for those remaining resisters, Honda has this: the updated 2022 Honda Civic. As you can see, the new Civic has shed its old “boy racer” look and has adopted the calmer, more conservative appearance of the bigger Accord sedan. Gone are the odd bumper polygons and the low and racy roofline, and in its place we have … well, what appears to be a three-quarter-scale Accord. But how much of the rest of the old racy Civic has become the new, more conservative Accord? I recently got to spend a couple of days with the new 2022 Honda Civic Touring, and I can confirm: The new one has grown up in many ways. 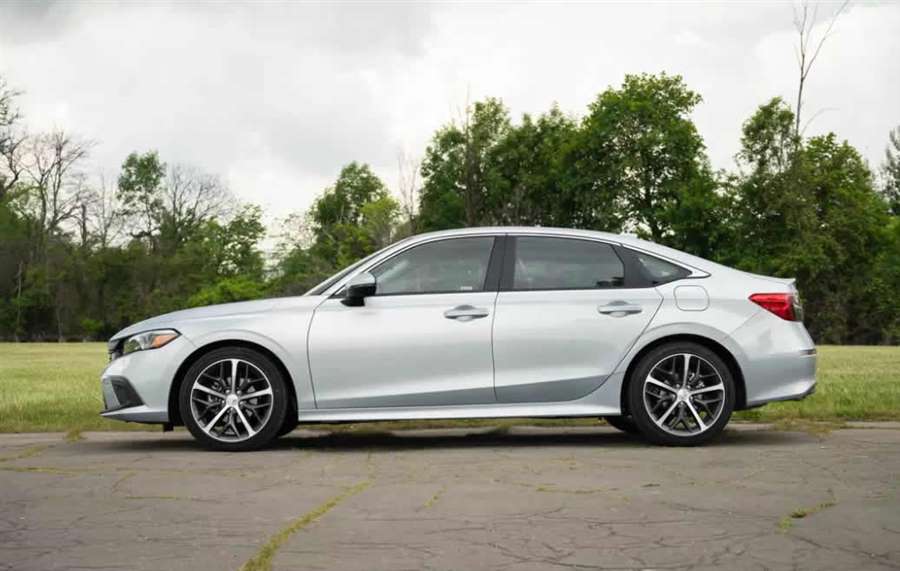 Controversial Looks
From the outside, the new car is easily mistaken for the Accord. There are many styling similarities, from the new proportions of the longer, lower body to the more upright roofline and larger windows; even that little kink in the C-pillar is copied over from the Accord sedan. It’s a decidedly more conservative look than the Civic has had for the previous two generations, and it comes just as competitors are getting ever more outrageous (have a look at the new Hyundai Elantra) in order to stand out and grab whatever share of the shrinking compact sedan class they can get. It’s not a bad look for the Civic, by any means, but its tepidness does make me wonder how this is going to look in a Type R version with scoops, wings and ducts added. 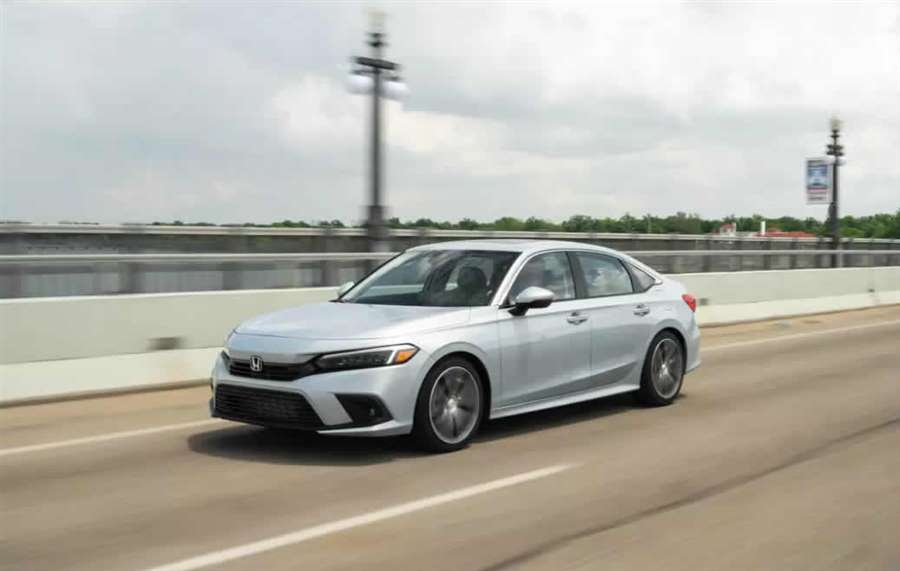 It’s Strong at Heart
Under the hood is a turbocharged 1.5-liter four-cylinder engine mated to a continuously variable transmission, which is, yes, the Accord powertrain. But in the Civic EX and Touring trims, this powertrain combination is good for 180 horsepower and 177 pounds-feet of torque, understandably less than it makes in the bigger Accord. It’s one of two possible engines in the new Civic, the other being a naturally aspirated 2.0-liter four-cylinder you get in the basic LX and Sport trims making 158 horsepower and 138 pounds-feet of torque. (Both are tied to the retuned CVT). There’s no sporty Si model or fire-breathing Type R track monster just yet, but Honda likes to get the basic stuff out of the way first before turning up the heat later on. 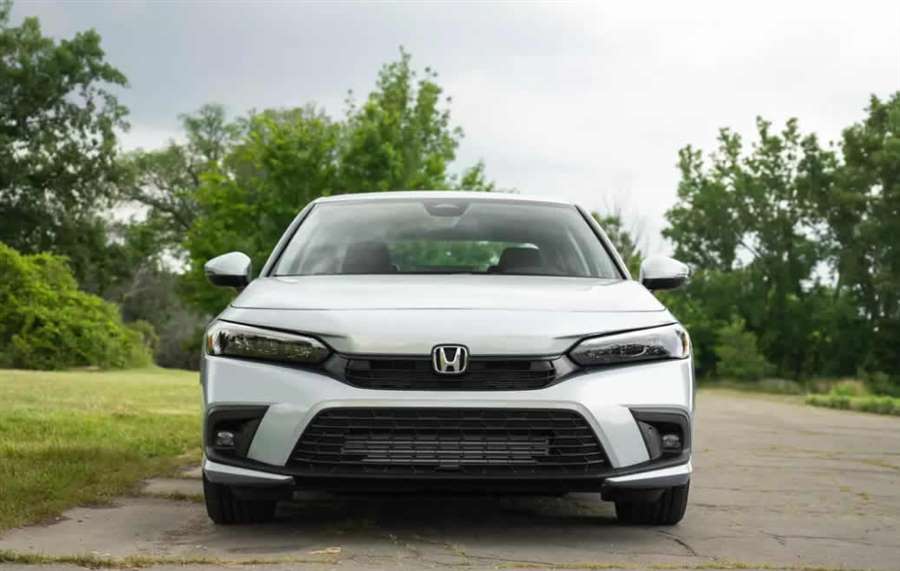 A Rethink of Honda Interiors
While Honda stylists may have made a near carbon copy of the Accord from the outside, the inside is a whole new world for the brand. The interior is much, much different than the Accord, featuring a retro-cool style that brings back some of the boxier looks of classic Japanese cars of the 1980s. There’s a long strip of hexagonal mesh dash trim that hides the front passenger climate control vents, and the interior itself no longer looks like it was designed by several committees that never talked to each other. What do I mean by that? Well, the doors now meld well with the dash design, and the graining of the materials is the same from the dash to the doors, as well. There’s a sophistication to the new Civic interior that looks quite refreshing, and it comes from a newfound minimalism that we first saw in the Honda e electric car that’s not sold in the U.S. 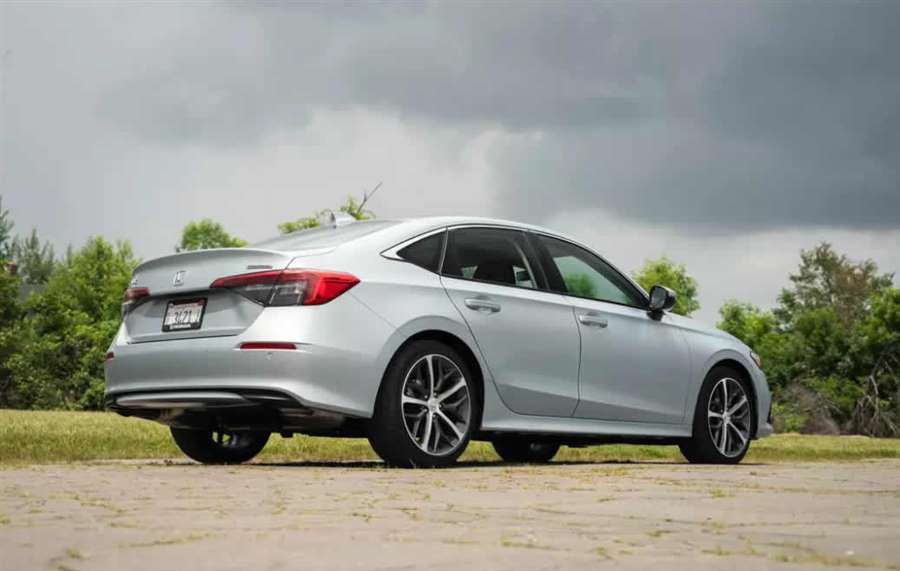 The new electronics look good, with a high-mounted 9-inch multimedia screen (the biggest ever fitted to a Honda-brand vehicle) easily reachable by the driver, with a dedicated volume knob and a big prominent “home” button. Wireless Apple CarPlay and Android Auto are standard with the 9-inch system in the Touring but require a cable if you stick with the standard 7-inch multimedia system. The new 10.2-inch digital gauge cluster that comes only in the Touring trim is also well done, with four possible arrangements: either traditional round dials or bar-type graphics, each also featuring a minimalist option that reduces the information overload to the driver.

Overall, there are only as many buttons as are needed, nothing extra, nothing confusing. Everything is arranged within the driver’s sightlines. I can even see the buttons that Honda likes to mount low and to the left of the driver’s knee without a problem now. You feel like you’re sitting low in the Civic thanks to the plentiful headroom, but the windshield feels upright and the dash and beltline feel low, improving the outward visibility considerably over the past Civic. The steering wheel feels substantial, and the shifter position (note that it’s not a push-button affair) is perfectly located for resting your hand. 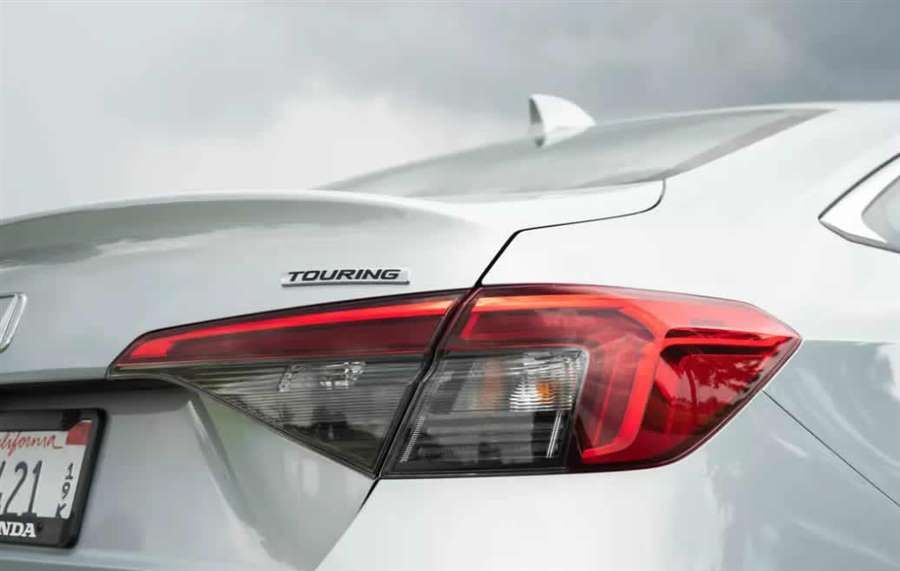 Materials quality was excellent in the top Touring trim level I drove, with leather seats and nicer trim up top. It’s also plenty spacious inside, with about average room for the category both front and back. The tall design to the overall exterior sheet metal comes in handy in the trunk, which feels quite capacious, with sufficient room in it to wonder if the upcoming hatchback model is really necessary. There’s a maturity to this design; it’s more friendly and approachable than futuristic and fantastical, but it again makes me wonder how Honda is going to zoot this up for its sporty models down the road. Guess we’ll have to wait and see.

More Entertaining Than Expected
Or will we? The Touring trim may not be the vaunted Si, but it still is far more entertaining to drive than any non-sport Civic trim level I’ve ever tried. The turbocharged engine is super-torquey; even a light jab of the pedal brings surprising acceleration. The transmission may be one of the best-tuned CVT units I’ve ever tried, it’s perfectly matched with the engine to provide quick power and impressive response. Something new for 2022 is a Sport mode on 2.0-liter Sport and turbocharged Touring trims, which changes steering and throttle response when you select it, allowing you to hustle the Civic along back roads with surprising speed — and you’ll find yourself grinning as you do it. 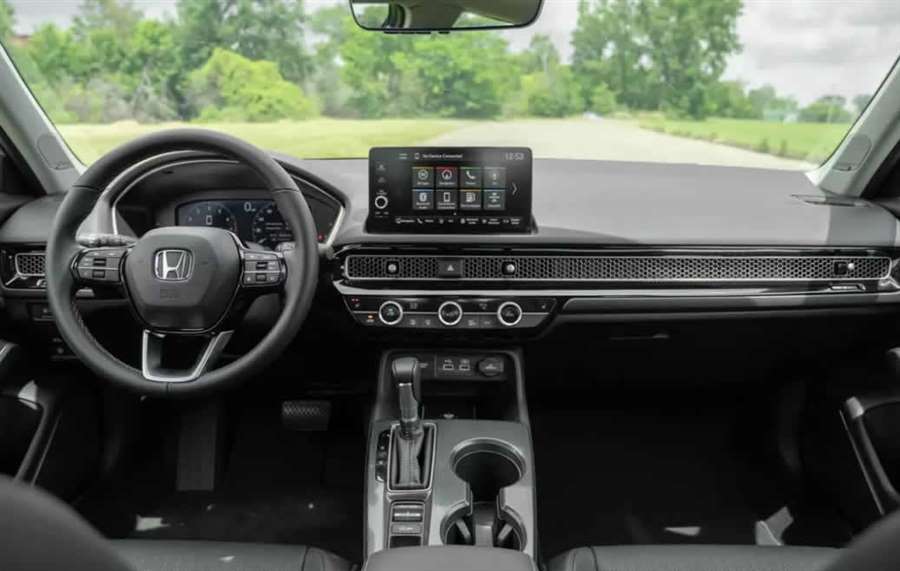 The whole experience of driving the new Civic is one of sophistication, and as good as an Accord is, this just might be better. The chassis response is excellent, the ride and handling balance is outstanding, and there’s actual steering feel and feedback, too. It feels considerably lighter on its feet than a new Accord, which always struck me as a bit piggish and heavy. Even the brakes are outstanding, providing excellent bite and progressive stopping strength without being the slightest bit grabby.

It may not be billed as a sporty sedan, but the Civic holds its own nicely and conveys the sensation of an advanced, refined, even premium driving experience. You can feel that the bones of the car are going to provide an amazing base for the actual sporty versions in the Si and Type R whenever they do arrive. I’d easily stack it up against the best out there like the latest Elantra, the Volkswagen Jetta or even more premium models like the Audi A3. If, like me, you really don’t see any need for a new crossover when there are still sedans out there that are this good, you’re going to want to put this new Civic on your list. 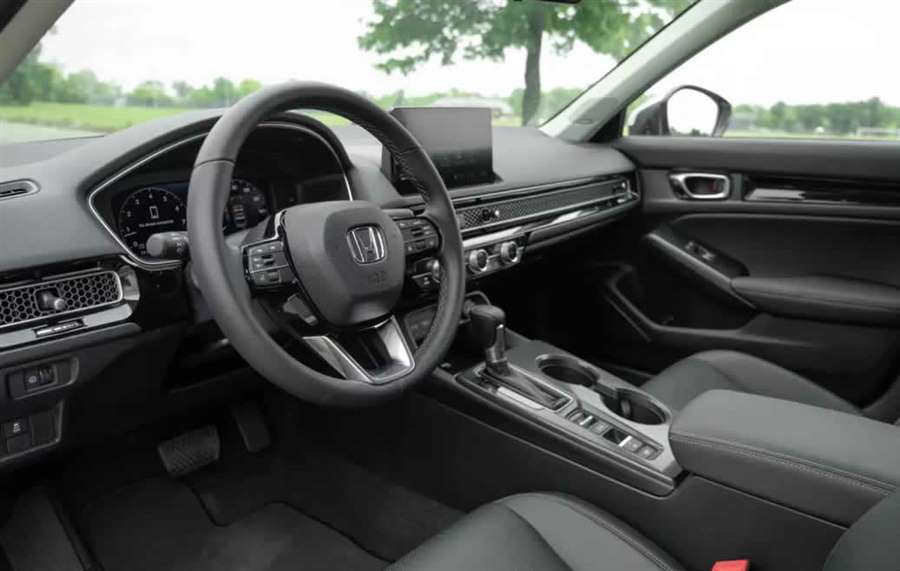 Long Live the Resistance
Honda has also brought some updates to the Civic’s onboard safety tech, now featuring available rear-seat side airbags, some next-generation front airbags meant to minimize head and neck trauma, and a new camera for forward facing systems like adaptive cruise control and pedestrian detection. There’s also a new optional 12-speaker Bose premium audio system that sounds fantastic. And loaded examples like my fully equipped Touring test car will come in just a hair less than $30,000, including destination.

But really, the story with the new Civic is the enhanced driving dynamics and simplified interior styling that elevate the car beyond its humble compact sedan class. It’s a substantial, satisfying car to drive, either on back roads or urban boulevards — and for SUV resisters, it’ll give you one more reason to avoid that new crossover for a few more years.