No Ferris wheels or fried dough, but the Carnival is good fun.

Drop the fantasy for a moment. As much as we'd all love to project the rough-and-tumble, outdoorsy ruggedness associated with the deep-voiced sales pitches in SUV ads, how often are you really tackling anything more challenging than a gravel parking lot or a dusty fire road? 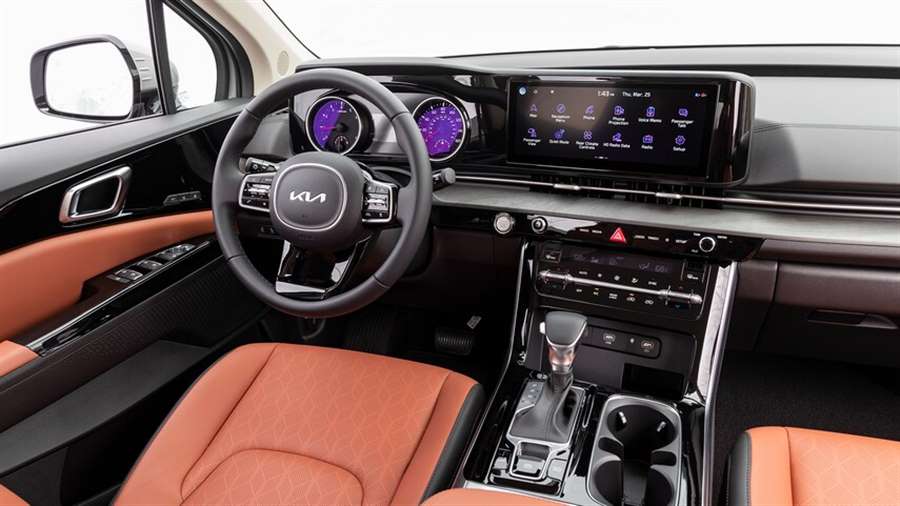 Buyers in need of three-row seating but who won't capitalize on the off-road Sporting aspect of a sport utility vehicle can get loads more utility out of a less ostentatious, less understood class of vehicle. The clever buyer shops for a minivan—or as Kia is calling it, a multipurpose vehicle (MPV). As much as we love the SUV of the year-winning Kia Telluride, the new 2022 Kia Carnival MPV could be a smarter fit for most families.

If you haven't heard of the Carnival, you're not alone. Kia introduced it as a new nameplate for 2022 to replace its Sedona minivan, which Kia has sold in the U.S. since the 2002 model year.

The Carnival rides on a lighter, stronger platform than the outgoing Sedona and features boxy, SUV-inspired sheetmetal reminiscent of newer Kia designs, including the Telluride, Seltos, and Sorento. (A neighbor even asked if it was an SUV or a minivan, which surely would thrill Kia's designers.) This is also the first model to don the newly redesigned Kia badge. 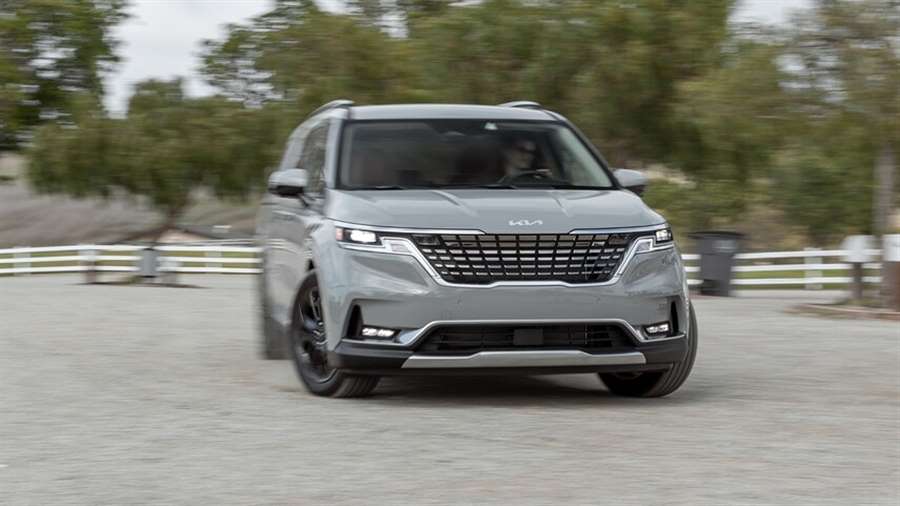 The Carnival is more spacious than the van it replaces, too. With 40.2 cubic feet of cargo space behind the third-row bench, it has 6.3 cubic feet more cargo volume than the old Sedona and at least 6.7 cubes more than any other current minivan. Stowing the third-row seats is easily doable with one hand via a chunky handle on the back of the seat, and with the seats folded, the load floor is completely flat.

Space behind the second row is class-competitive but a few cubes behind a comparable Honda Odyssey or Chrysler Pacifica. The Carnival's second-row seats are removable (in all models save the range-topping SX Prestige), a feature the Sedona didn't offer. To do so, lift a lever under the back side of the seat and fold the seat forward; removal requires no more than average adult strength, but the awkward shape means it may be wise to enlist the help of a partner. 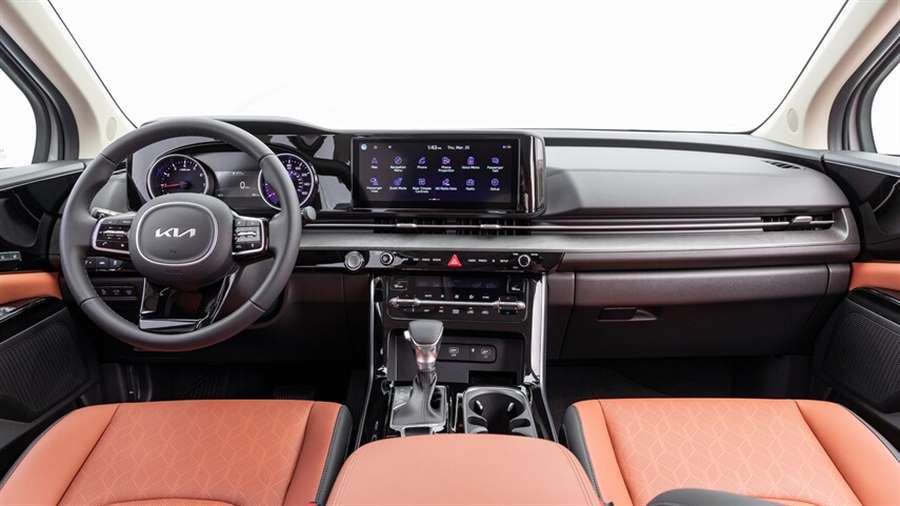 Those planning to frequently swap between using the maximum space behind the first row and using the second-row seats may be better off with Chrysler Pacifica's Stow 'n Go solution rather than wrangling the second-row seats into and out of the Carnival. Once they're removed, however, not only does the Kia have more space behind the first row than any other minivan, but its cargo volume also measures larger than that of the colossal Chevrolet Suburban (145.1 versus 144.7 cubic feet).

But don't go thinking the Carnival is just a cargo van stand-in. The new MPV can be ordered in seven- and eight-passenger configurations, both with ample legroom in all three rows. Third-row access is near effortless with a one-hand pull of a handle beneath the second-row armrest that folds and slides the seat forward; older kids will have no problem operating it themselves. Third-row legroom matches the Pacifica and is a couple inches behind the Sienna and the Odyssey. A 6-foot-1 passenger has just enough legroom in the way back, but their head likely will be brushing the ceiling. Also, the rearmost windows border on claustrophobia-inducingly small. 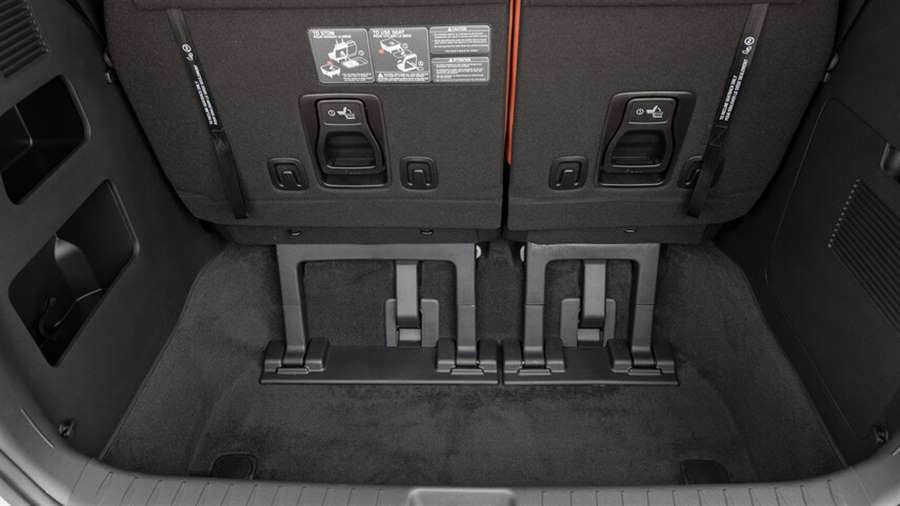 The second row is really where it's at. Beyond the 40.5 inches of legroom, its neat aspect comes with the SX Prestige and its "VIP" second-row seat. The Prestige swaps out the standard second-row bench for two leather-lined, heated, and cooled lounges that are more comfortable than the furniture in most living rooms. You can slide them way back, to make room for the Prestige's party trick: full recline with power-extendable legrests. Friends compared them to the plush recliners in upscale movie theaters. At $47,275, the Carnival SX Prestige is pricey, but it's less than other top-spec minivans. And it easily represents the most luxurious rear seating experience in any car under $50,000.

Up front, there's an 8.0-inch touchscreen infotainment system featuring Apple CarPlay and Android Auto as standard, but that's only on the base model. All other trims showcase a huge 12.3-inch display that's set high on the dash to keep your eyes near the road. Through the infotainment screen, the driver or front passenger can access the cabin camera and the intercom (standard on EX and above), which allow parents up front to talk to and keep an eye on kids in the back without turning around. 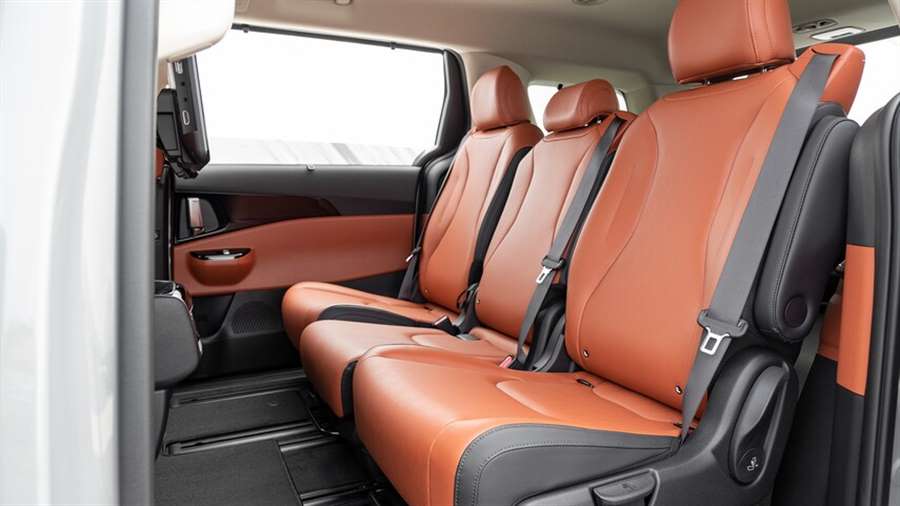 Living With The Kia Carnival

For the most part, it all comes together as a well-executed people mover.

There are six USB charging ports in the car (eight with the rear seat entertainment displays) plus two three-prong household outlets and two 12-volt power outlets. Including the wireless charging pad that's standard on EX trims and higher, it's possible to charge as many as 13 devices at once. The Carnival has 11 cupholders, too—no matter how many people you pack into this thing, no phone need go uncharged and no cup or juicebox unheld. 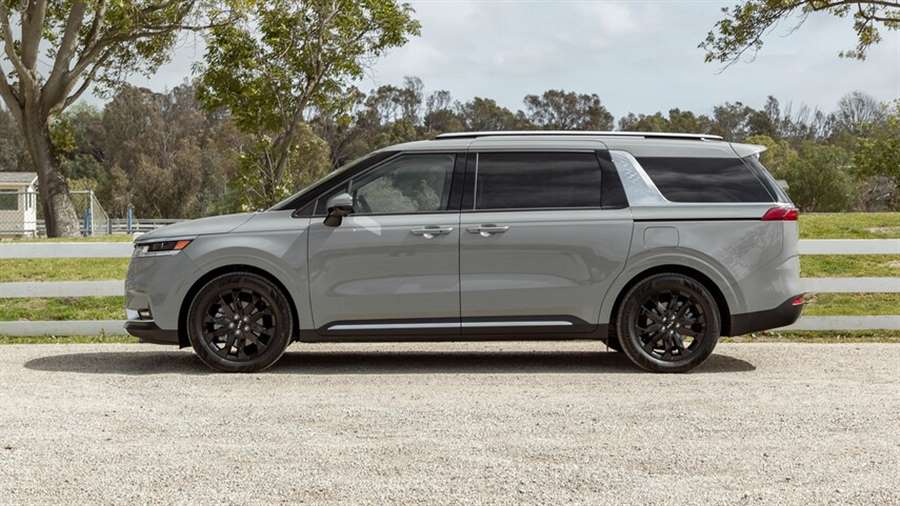 The interior design is just as handsome as the bodywork. Kia integrates metal-look trim throughout the cabin, and leatherette upholstery is standard on the EX and SX. Especially with the Prestige trim's dual 12.3-inch front displays, the cabin gives off real Mercedes-Benz vibes. That said, the metallic trim can cause dangerous glare for the driver in the wrong light. What's more, Kia's overreliance on capacitive-touch buttons for HVAC and infotainment controls can be frustrating, as they lack tactile feedback and can be tough to find without taking your eyes off the road.

SX trims and above include dual 10.1-inch displays as part of a rear entertainment system. The displays feature preinstalled apps for streaming Netflix, Youtube, and Twitch, and there's a kids mode with graphics by Pinkfong, the South Korean children's educational empire behind last year's Baby Shark phenomenon. Factor in the HDMI, USB, and wireless device-mirroring capabilities, and the entertainment prospects are vast.

The rear entertainment displays are not perfect, however. Streaming content through any of the preinstalled apps requires connecting the system to a paired smartphone's Wi-Fi hot spot because unlike its competitors, the Carnival does not include one. In an effort to treat the Carnival as a mobile office for an afternoon, we were also frustrated to find the HDMI input produced a fuzzy, low-res image and too much lag to accurately use a cursor, though Kia insists the examples we drove were pre-production units and this could change. 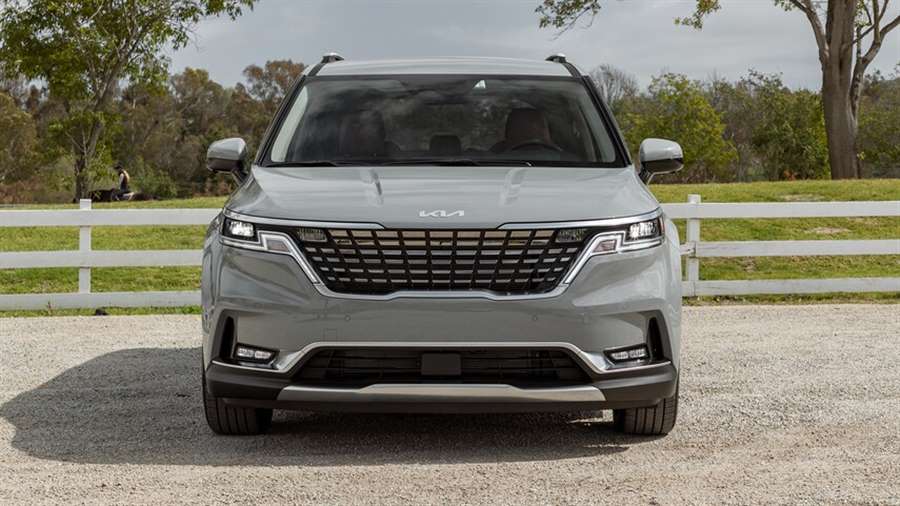 The biggest surprise from our time with the Carnival? How well it drives.

Kia has developed a new 3.5-liter naturally aspirated V-6 for the Carnival. With 290 hp and 262 lb-ft, it's the most powerful engine in the segment and is tied for the most torque. Paired with a smooth-shifting eight-speed automatic that is rarely caught in the wrong gear, the engine provides ample acceleration. The Carnival is also rated to tow 3,500 pounds, which is typical for this class.

Vans like this need to ride well, too, and this Kia achieves that. The combination of relatively soft springs and tires with plenty of sidewall delivers a plushness that won't wake the baby in the back seat if you hit a pothole. More impressive, though, the Carnival exhibits next to no body roll and minimal secondary ride motions. It's genuinely fun to drive. And when you're just on a highway slog, Kia's lane centering and adaptive cruise control systems are among the best in the business. 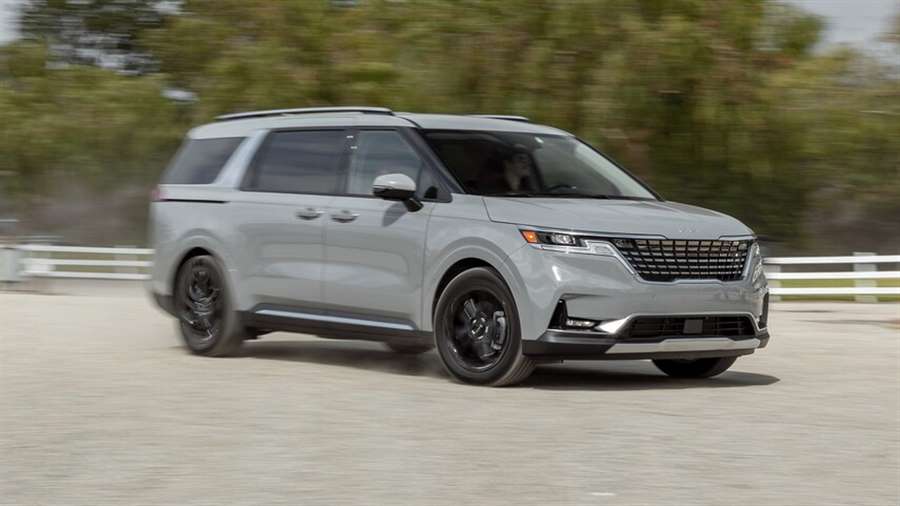 Our only complaint about the mechanicals is the lack of choice. With the new Sienna debuting with a hybrid-only powertrain and Chrysler offering a plug-in hybrid Pacifica, some buyers will be dismayed by the Carnival's 22 mpg combined fuel economy rating. (Queried about the lack of a hybrid offering for the Carnival, a Kia representative said, "Be on the lookout for what's in store. ") Drivers in colder climates may also be lured away by Chrysler and Toyota's available AWD—the Carnival is FWD only.

We mentioned earlier that Kia is marketing the Carnival as an MPV, a multipurpose vehicle. Nothing wrong with that; it can manage stand-in duty as a comfortable road tripper, an executive luxury limo, or even a full-blown cargo hauler.

But consider the Carnival's strengths: smooth ride; thoughtful, family-friendly features; intuitive tech; and a vast, high-quality cabin. Lean in to the stereotype, Kia. The Carnival is an excellent modern minivan.