“The Range Rover Sport PHEV could prove to be far cheaper to run than other models in the range, and it’s more luxurious, too”

The Range Rover Sport P400e plug-in hybrid arrived as part of a range update, and brought with it an option in the luxury SUV’s range that will be of great interest to company car drivers. Tax rates and running costs will be significantly lower than for other versions of this big, heavy car, yet it offers an impressive level of comfort and luxury. 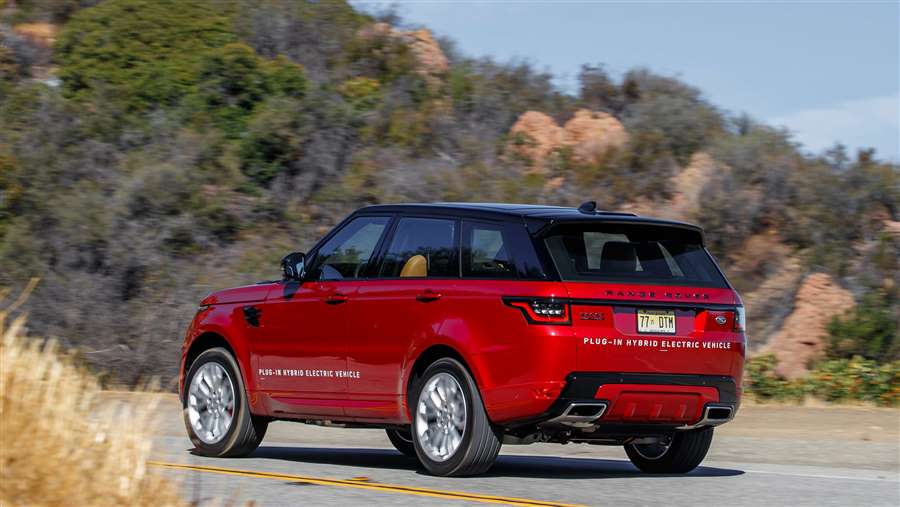 There are plenty of alternatives, including the Volvo XC90 T8 Twin Engine, Audi Q7 e-tron, BMW X5 xDrive40e and Porsche Cayenne S E-Hybrid. The Range Rover Sport has only around 26 miles of all-electric range, so it falls behind some of these rivals when it comes to commuting on battery power alone.

The Sport features a 297bhp 2.0-litre turbocharged petrol engine and a 114bhp electric motor, so it can go from 0-62mph in 6.3 seconds. It’s not just about the power, though, because the electric motor means low-speed driving is as quiet as it gets. Of course, this being a Range Rover the electric motor’s instant torque means it’s a superb off-roader as well – although most owners never go near so much as a muddy field.

The interior is as luxurious as you would expect given the brand’s credentials. Materials are high quality and there’s plenty of tech, including a dual-screen infotainment system with all the modern features you need. One area the PHEV model does lose out is with boot space, because of the space taken up by the hybrid batteries. There’s no seven-seat option here, either, and the plug-in model’s maximum towing weight is lower than for other versions.

From the outside, you might not think you are even looking at an electrified car. The only clues lie in the charging port on the front – and even this is hidden away most of the time – and the badges.

The Range Rover plug-in makes the most sense for those who don’t tend to do a lot of long trips but can’t quite make the jump to a fully electric car just yet. Yet the Range Rover Sport P400e is possibly the most luxurious model in the range to drive, because of the near-silent low-speed running when the engine is off. We’d still stick with a diesel model if you do a lot of motorway trips, though.

If you regularly cover short distances, the Range Rover Sport P400e makes a lot of sense

The Range Rover Sport P400e might have a relatively thirsty 2.0-litre turbocharged petrol engine, but combining this with an electric motor and battery pack means running costs can be significantly reduced. As with all plug-in hybrids, this benefit diminishes the further you drive – and if you don’t have access to a charging point – so the P400e is best suited to motorists with a fairly short commute who can top up the batteries frequently. 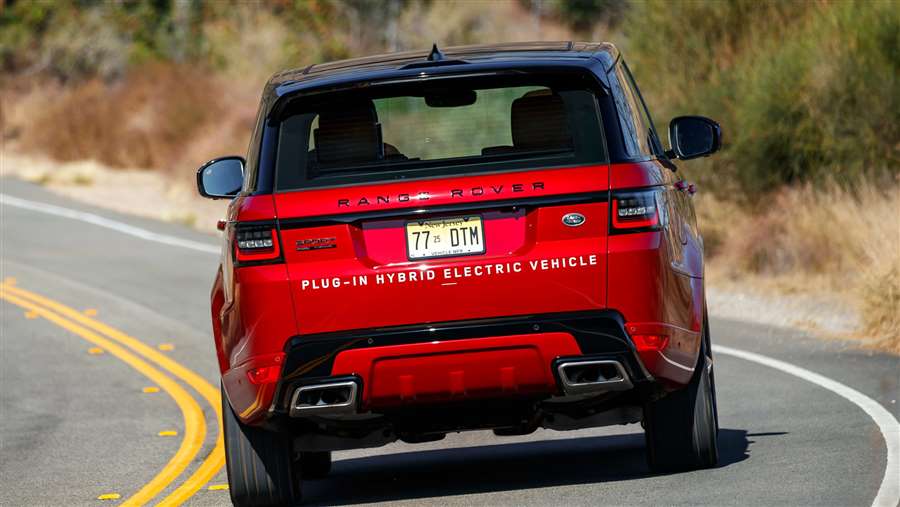 Thanks to the 13.1kWh lithium-ion battery pack, the Range Rover Sport can travel for up to 26 miles on electricity alone, boosting its official fuel economy figure to 88mpg – a huge improvement over the 27.4mpg of the equivalent petrol-only model. While this figure will obviously depend on how you drive the P400e, its 72g/km CO2 emissions figure is fixed, which means this is by far the cheapest Range Rover Sport for company car drivers. Its 18 per cent Benefit-in-Kind (BiK) band compares with 37 per cent for the standard Si4 petrol.

Compared with its closest rivals, the P400e betters the 25-mile range and 75g/km CO2 emissions of the Porsche Cayenne S E-Hybrid, while the Volvo XC90 T8 Twin Engine manages just 59g/km of CO2 and 134.5mpg, and has a slightly lower, 25-mile range on battery power. 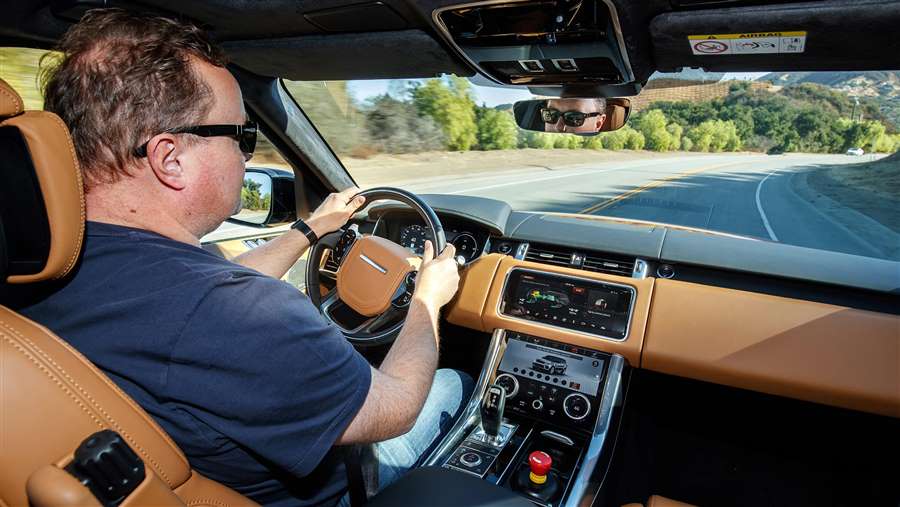 Road tax for the P400e costs the discounted VED (road tax) rate each year. However, there’s also the additional surcharge in years two to six owing to the fact the hybrid costs more than £40,000 to buy.

Charging the P400e at home takes around 7.5 hours using the standard 10-amp cable, but this can be sped up to under three hours using rapid charging with a dedicated wall box and 32-amp cable. The charging port is located in the front grille, making it easier to park facing public charging posts.

The P400e is no slouch, but it’s less fun to drive when the batteries are depleted 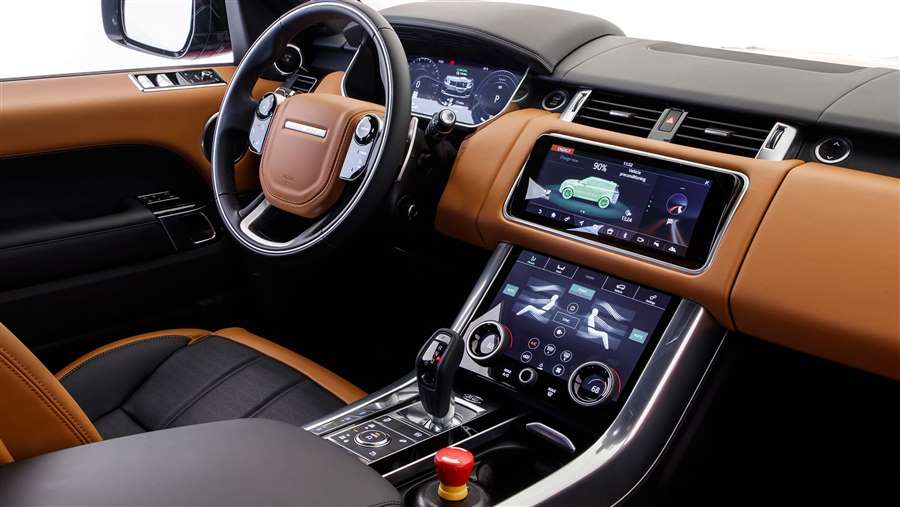 The Range Rover Sport’s P400e badge signifies its power level, because its turbocharged 297bhp 2.0-litre petrol engine and electric motor combined produce up to 399bhp. This PHEV certainly isn’t short of power, then, sprinting from 0-62mph in just 6.3 seconds, before hitting a maximum speed of 137mph. This is only four-tenths faster than the petrol model, but the P400e feels very different to drive, especially in town. Here, electric power allows the Sport to accelerate briskly from a standstill with little fuss or noise – attributes that suit its character. It's just a shame the P400e can hesitate when asked to accelerate from a rolling start at a junction or roundabout – a frustrating sensation.

Using 'Save' mode allows you to keep the battery charge for use later, even if you fancy some silent and green off-roading. Here, the P400e still has to fulfil its Range Rover brief, and the Terrain Response 2 off-roading ‘brain’ has been calibrated to make use of the instant torque of the electric motor to improve control when negotiating low-speed obstacles.
Back on the road, it’s when the battery pack is depleted that the Sport P400e makes least sense. With a small engine and more weight to lug around, it needs working fairly hard and emits a vocal whine that’s at odds with the Range Rover’s luxurious character. 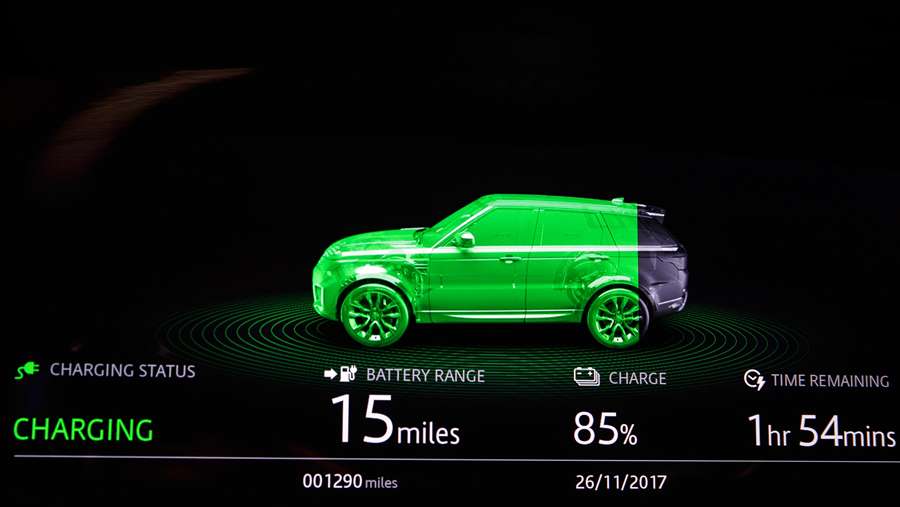 Tackle a winding road and the P400e does a better job of disguising its weight, serving up impressive agility and grip for a big SUV. It’s sharper than the XC90 that majors on comfort, while being slightly less driver focused than the Cayenne.

The Sport is just as luxurious as ever, but now has more up-to-date technology

Inside, the Range Rover Sport is just as luxurious as ever, with swathes of leather covering virtually every surface and metal trim that’s cool to the touch. The PHEV features the brand’s Touch Pro Duo infotainment system, with two 10-inch displays stacked on top of each other. These are crystal clear and look great, with the top display taking care of sat-nav and media, while the bottom screen is used for vehicle settings. It largely works well, but smartphone integration still lags behind rivals such as the Audi Q7 – and it's a bit of a fingerprint magnet. 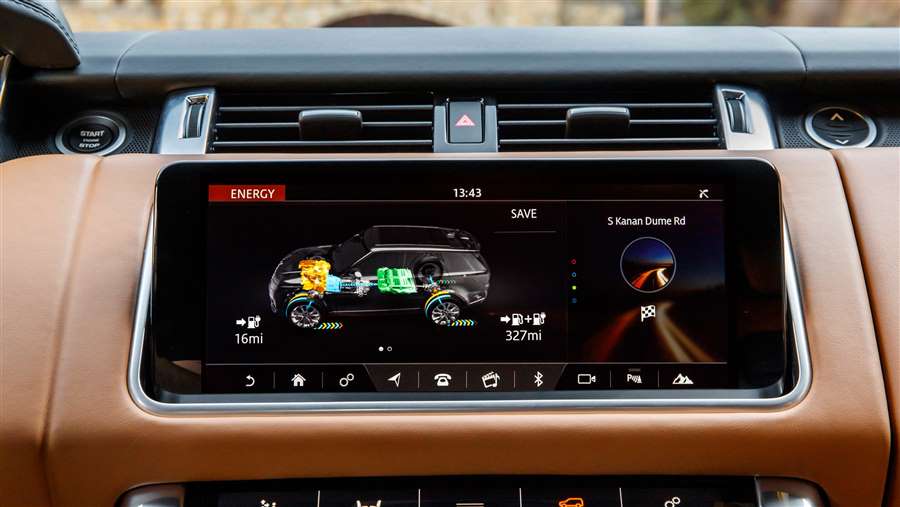 There are plenty of places to charge your smart devices, with up to 12 power points dotted around the interior, as well as two traditional power sockets to charge laptops and other devices that need more juice than a USB port can provide. You can essentially turn the Sport into an office away from home – or family entertainment centre – at the drop of a hat. The introduction of the Activity Key from the Jaguar F-Pace means you can also take a waterproof wristband on your outdoor adventures instead of the key and use it to unlock the car when you get back.

The battery pack reduces load space and towing ability slightly, but they’re still beyond what most families will need

It has a lower roofline and sleeker shape than the standard Range Rover, or a Volvo XC90 for that matter, but the Range Rover Sport is still a large SUV. It can carry five adults in comfort, with well shaped leather seats providing plenty of support.

However, there have been some compromises in practicality in order to fit the battery pack and electric motor. In the standard Sport, there’s up to 780 litre of luggage space, but this is reduced by up to 79 litres in the P400e, while the boot floor is also raised up by 46mm. Perhaps more significantly for families, there’s also no longer the option of the 5+2 seating layout that makes the Sport an occasional seven-seater, because there’s no room to stow the third row in the boot.
Towing has been made simpler, thanks to Advanced Tow Assist, a driving aid that allows you to guide a trailer into place using the reversing camera and turning the rotary controller to steer its path. The on-board computer then automatically works out the correct steering inputs required. It’s worth noting that the P400e can tow between 500-1,000kg less than other Sports, but its maximum trailer weight of 2,500kg is still more than enough to pull a large caravan. 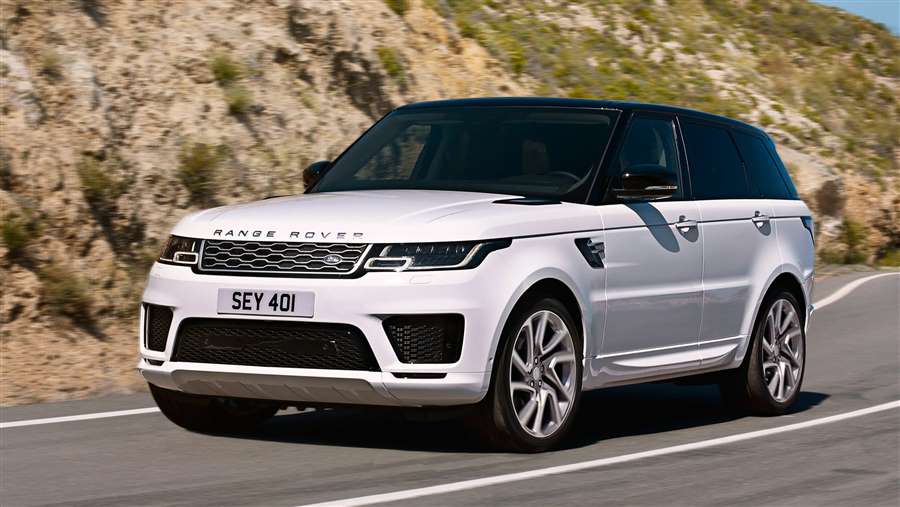 Land Rover doesn’t have the best reliability record, but the Sport is loaded with safety equipment

Land Rover doesn’t have the best reputation for reliability, and in our 2021 Driver Power owner satisfaction survey it finished in 22nd place – although that’s actually an improvement over previous years.

While the Range Rover Sport hasn’t been crash tested by Euro NCAP, safety should be less of a worry. Both the fully fledged Range Rover and the Range Rover Velar managed a five-star result, so there’s little reason to think the Sport would do worse. It shares most of those models’ safety kit after all, including features such as autonomous emergency braking, blind-spot monitoring and electronics designed to help prevent rollover accidents.

For the right type of driver, the Sport PHEV could bring real cost benefits

Depending on its specification, the 400bhp plug-in hybrid P400e costs around £4,000 more than a Range Rover Sport fitted with a 300bhp V6 diesel engine. Some will consider this a bargain, especially company car drivers considering the potential tax savings – although we’re talking about a car costing well over £70,000 here, so it’s all relative.

However, the savings only really make sense if you plan on driving on electric power a large proportion of the time. If you often drive more than 30 miles a day, or on long trips, a diesel will probably make more sense.

BMW
BMW M440i xDrive Noses Away From Its Roots