Once upon a time, station wagons dominated America’s roadways. They were the preferred mode of transport for frugal families road-tripping across the country until the arrival of the minivan. Today, wagons make up a sliver of new vehicle sales. That’s despite a surge in models that blur the lines. Traditional wagons exist and continue to appeal to consumers looking for something different, but high-riding, ruggedized long-roofs are becoming more and more common.

Subaru is the most successful purveyor of this sort of car, but Volvo has its Cross Country range and Audi is expanding the Allroad line with a new A6 Avant-based model. These vehicles attempt to marry the appeal of wagons – that they’re interesting, different holdovers of another time – with the air of capability that makes crossovers popular. For 2021, Mercedes-Benz is getting in on the action, discontinuing its E450 Wagon and introducing the E450 All-Terrain.

Packing a standard air suspension , a boost in ground clearance, and some rugged body mods (not to mention the same changes introduced on the broader E-Class line for 2021) does mean added capability. But even with these new touches, this high-riding wagon feels too much like its traditional counterpart in a few important ways.

The E-Class All-Terrain’s new headlights, more prominent grille, and tweaked front bumper conspire to produce a more premium, attractive face than last year’s E-Class Wagon. And where the back of the revised E sedan looks worse than its predecessor, the designers left well enough alone on the wagon, retaining the slim, horizontal taillights and a wide-opening aperture with a low lift-over height. 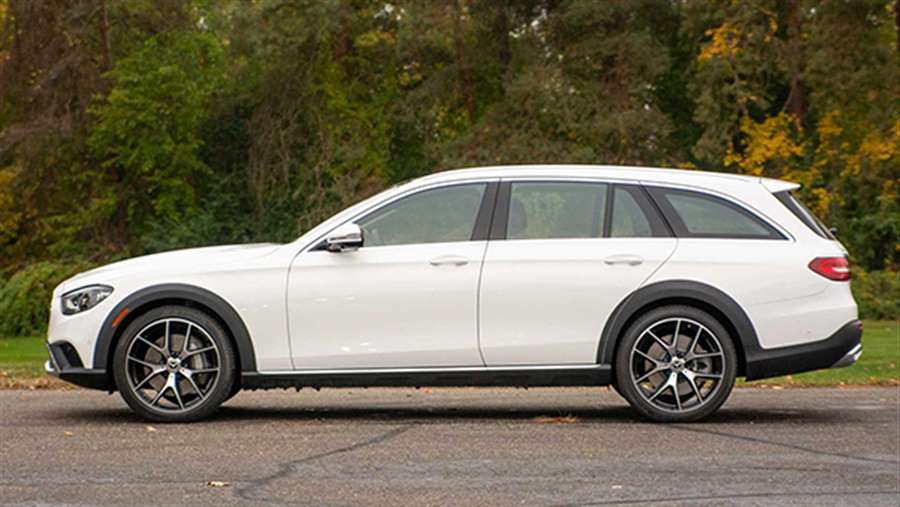 The All-Terrain differs from its predecessor, though, with prominent black plastic around its wheel arches and side sills. The 2021 model is no wider than last year – both cars span 73.7 inches, not including the mirrors – but there is a subtle flare to the arches that produces more visual mass. There’s also black plastic on the front and rear bumpers, although the protection on offer is minimal (this is no G-Wagen).

The car’s stance is more purposeful, although our tester left us scratching our head with its optional 20-inch wheels.

Completing the tougher look is a boost to the E450’s ride height. The now-standard air suspension offers 5.8 inches of ground clearance, 2.0 inches more than what you got from last year’s E450 Wagon. The car’s stance is more purposeful, although our tester left us scratching our head with its optional 20-inch wheels. They look good and are a visual benefit to the car overall, but big wheels and skinny sidewalls don’t give the impression of SUV-like toughness. 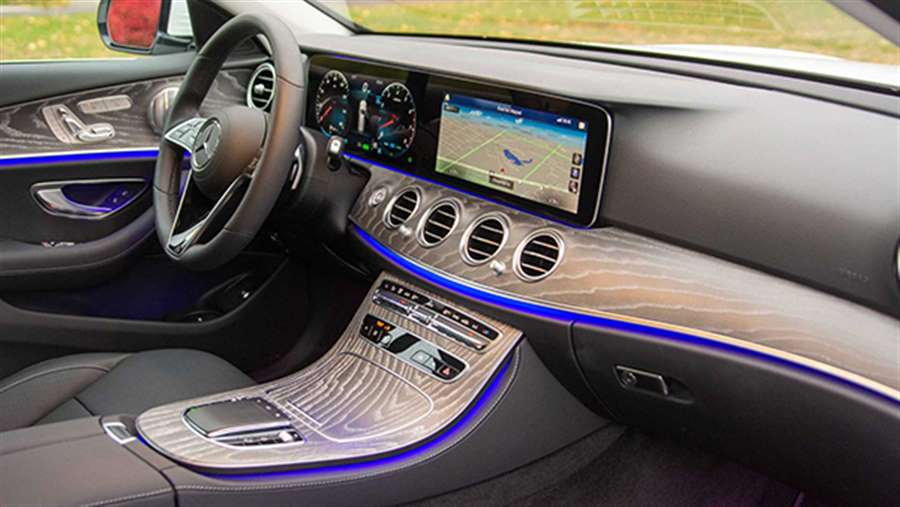 Mercedes made one significant change to the E-Class cabin, with every variant receiving a new steering wheel design. The company opted to replace physical buttons and scrollers with touch-capacitive controls. Some work, like the “buttons” that activate and adjust the cruise control. But the important controls – the volume slider and the directional pads for controlling the digital instrument cluster and infotainment system – tend to have a mind of their own.

This is not a Mercedes problem, but these lifted wagons are rarely as capable as they look. In the E450 All-Terrain’s case, though, the bones are good. The air suspension allows up to an inch of height adjustment, and new Offroad and Offroad Plus driving modes, plus hill descent control, provide an easy avenue for tweaks to the suspension, stability control, and powertrain.

The chink in this car’s armor is, as is often the case, its tires. The E-Class is only available with 19- or 20-inch wheels with 245/45/19 or 245/40/20 tires, respectively. Our tester featured the larger option and was perfectly fine on smooth and paved roads. The soft air suspension soaks up abuse so well that you aren’t even aware you’re riding on rubber bands. But dirt roads are an anxiety-inducing experience, to the point that we can’t understand why Mercedes engineered dedicated off-road driving modes – they’re moot with the factory wheel/tire choices.

It’s a miracle the E450 survived our dirt-road session without a flat tire.

We integrated 90 minutes of dirt-road driving – typical stuff for rural Michigan – into our usual test loop, and it’s a miracle the E450 survived without a flat tire. Bumps that didn’t look all that significant sent a groan-inducing shudder through the body, preceded by the instantly identifiable clunk of a wheel accepting forces that the tire should handle. While it hurts the aesthetics, the first thing we’d do with an E450 All-Terrain is drop the wheel diameter to 17 or 18 inches and then fit the thickest sidewalls the car could accommodate without rubbing – there’d be a dramatic improvement in dirt-road comfort.

Still Works As A Wagon

Despite the All-Terrain treatment, the E450 still works as a suburban runabout. Packing a new engine for 2021 – a non-AMG version of the E53’s turbocharged, mild-hybrid straight-six – and standard all-wheel drive, this wagon offers innocuous performance around town. There’s 362 horsepower and 369 pound-feet of torque – identical to the E450’s old twin-turbo V6 – and while Mercedes isn’t publishing a zero-to-60 time, we’d wager it remains in the five-second range. 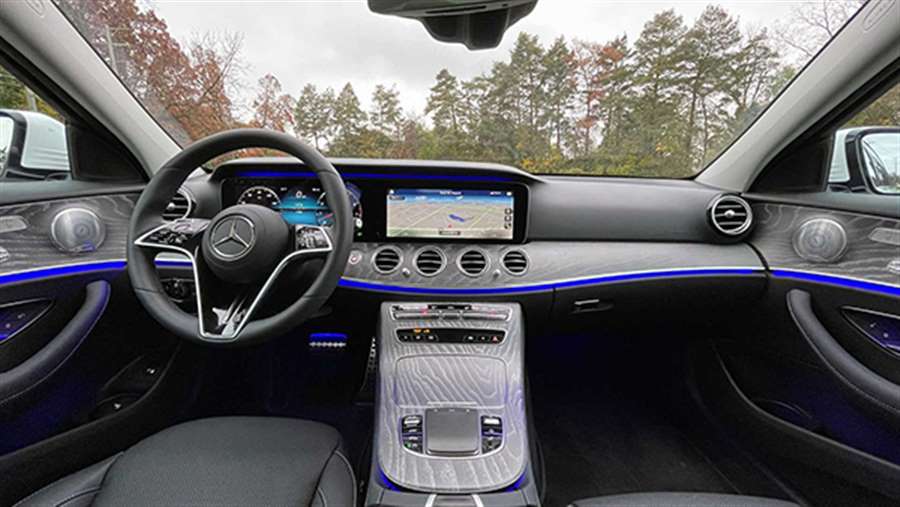 The 2021 E450 doesn’t feel any quicker than its predecessor, but the new mild-hybrid engine is far, far smoother. That’s partially down to the inline layout – arranging six cylinders in a row is inherently better than putting them in a V – but also thanks to the EQ Boost mild-hybrid system, which uses a 48-volt electrical architecture to power a compressor that immediately spools the turbocharger. The combo of these two things means that off the line, the All-Terrain accelerates like the more luxurious, refined car. The new engine is quieter, for a start, but what you hear is smoother and more pleasant, too.

Despite the All-Terrain treatment, the E450 still works as a suburban runabout.

Meanwhile, the added ride height has only a small impact on how the All-Terrain handles. There’s more body roll, which makes sense, but it’s easy to predict how the car will respond to inputs. Overall grip levels are high too, owing to the wildly inappropriate-for-an-off-roader Pirelli PZero rubber. This is an easy car to hustle about.

Price Is Still An Issue

Ultimately, and as was the case the last time we drove an E-Class Wagon, we’re still concerned about the cost of this variant and the limited number of configurations it’s available in. The All-Terrain only offers the 3.0-liter EQ Boosted straight-six, while its $67,600 starting price is over $10,000 more than a GLE 350 4Matic and $5,100 more than its nearest counterpart, the GLE 450.

Those points aside, the All-Terrain has one big pro we haven’t mentioned: exclusivity. Mercedes imports precious few wagons to the United States each year, making the E450 and its AMG counterpart, the E63, two of the company’s rarer vehicles. That hasn’t been enough to motivate customers in the past, but with a ruggedized alternative to the traditional wagon arriving in showrooms soon, it’s possible that Mercedes may see some more interest from American consumers looking for something different. Read more > https://mercedes-world.com/e-class/mercedes-benz-e-450-all-terrain-review