Almost as practical and as clever as ever, it appears the Skoda Enyaq Coupe will offer few drawbacks over its conventional counterpart. Skoda has never been one for compromise, and on this evidence, that trend looks set to continue long into the future.

Skoda has dabbled with coupes in the past, but most recently it’s come to be known for its humble family hatchbacks, cavernous estate models and spacious SUVs rather than anything you’d conventionally call stylish, or fashionable. 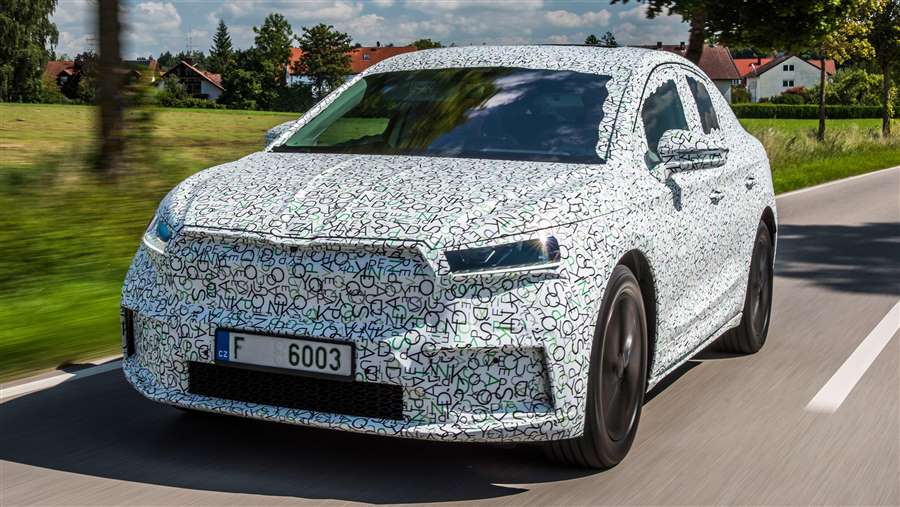 But not one to get left behind, the Czech maker is gearing up to launch a coupe version of its pure-electric Enyaq SUV later this year. Set to be revealed in December, the Enyaq Coupe iV will go on sale in the UK in January next year, with first customer cars arriving in early summer 2022.

It’ll get all the same battery and motor combinations as the existing Enyaq SUV, meaning a choice of iV 60 (58kWh battery, 177bhp) and iV 80 (77kWh, 201bhp) models, plus a range-topping iV 80X with all-wheel drive and 261bhp. A performance-focused vRS version is planned for later. 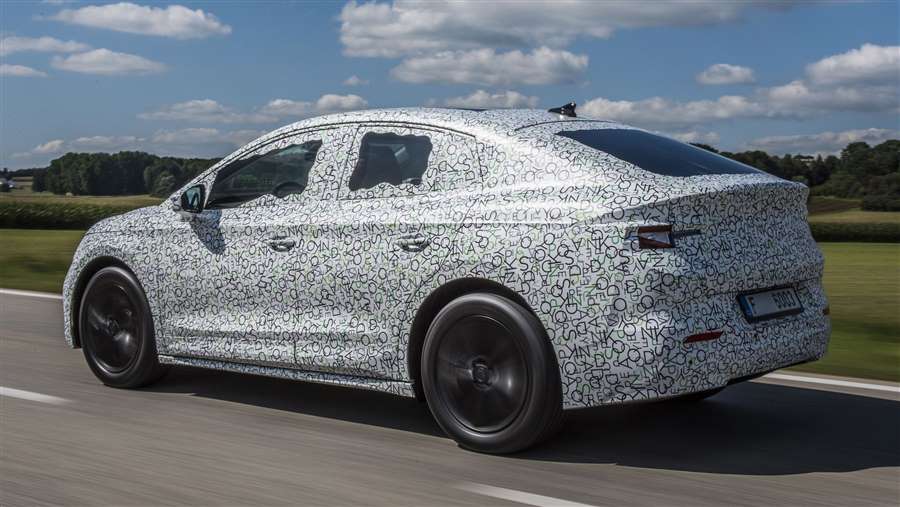 To get a taste of what’s in store, we were given the chance to try a camouflaged version of the 4.65m-long Skoda SUV on European roads. Identical from nose to B-pillar, the Coupe’s smoother, more rakish roofline and the subsequent changes inside are the big news here.

These tweaks are arguably best sampled from the rear seat, then. Every version gets a fixed, full-length panoramic roof, but thanks to special heat reflecting glass, the car doesn’t require a roller blind. This frees up space in the back, where only those over six foot will find their heads brushing the roof; knee room is particularly generous, while the MEB platform’s flat floor means even those in the middle can get comfortable.

The boot shrinks, but only marginally – from 585 litres in the standard Enyaq, to 570 litres in the Coupe. It’s a decent shape, and unless you’re regularly loading the car to the roof you’re unlikely to notice the slightly smaller capacity; there’s a big, deep well under the floor that’s perfect for storing the car’s charging cables, too. 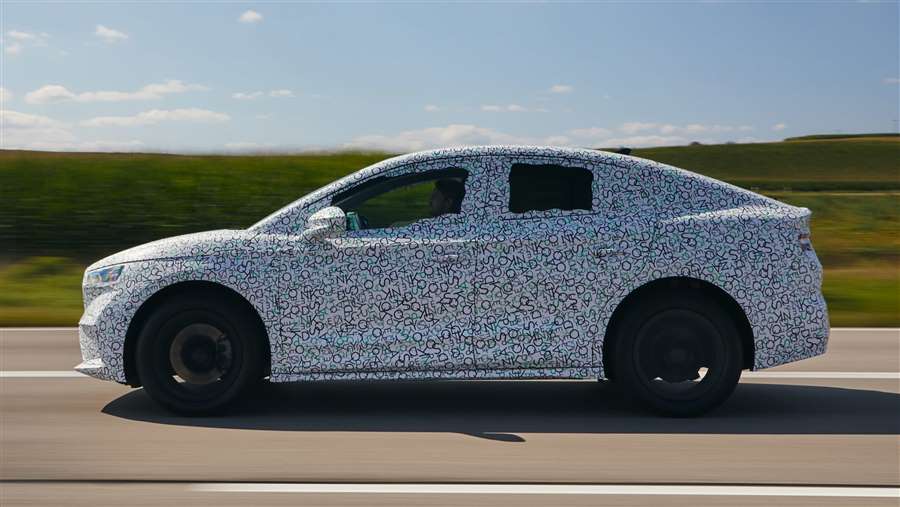 Speaking of which, Skoda says that developments in battery technology mean that the Enyaq Coupe will launch with brand-new ‘ME3’ software enabling not only faster peak charging, but a flatter charging curve. While bosses couldn’t confirm charge times at this stage, we can expect the Coupe to better the current flagship Enyaq’s 125kW maximum, as well as slightly reducing the 10-80 per cent charge time of 34 minutes.

In terms of range, a more favourable drag coefficient means the Enyaq Coupe is, Skoda says, capable of “10 to 15km” (6-9 miles) more than the conventional car on a single charge. That should mean, for this iV 80 model, somewhere in the region of 340 miles – versus 331 in the normal Enyaq. The figures haven’t yet been homologated, but in any case, the difference is likely to be negligible in real-world driving.

From behind the wheel, the Coupe is near-enough indistinguishable from any Enyaq we’ve driven to date. Refinement is excellent, tyre noise is non-existent, and wind noise was barely noticeable. This is largely true of the standard SUV too, of course, despite its boxier shape. 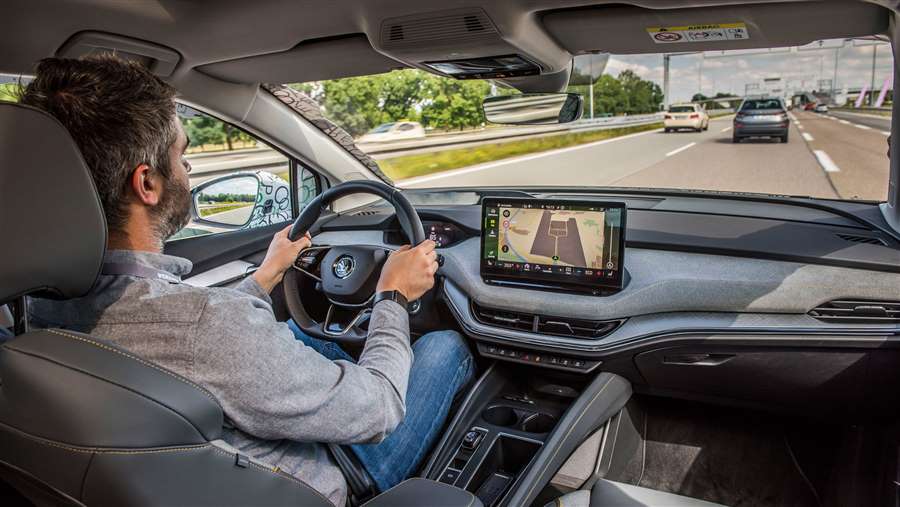 The suspension and chassis feel stiff, but never uncomfortable – aided by smooth roads, the smallest 19-inch wheels, and our Enyaq’s adaptive dampers. The steering is on the weightier side compared with rivals, but lacks the finesse or sharpness found on a Ford Mustang Mach-E, for example.

On-paper, performance is little more than satisfactory alongside, say, a Tesla Model 3, although that doesn’t dent its appeal. You still get that shove of instant torque, but without constantly having to watch your throttle inputs or your speed via the standard-fit digital instrument cluster. Figures haven’t been confirmed, but we expect 0-62mph in around eight seconds and a top speed of around 100mph.

We mentioned that the Enyaq Coupe is visually identical to its standard sibling from the B-pillar forwards – and it’s the same story inside. The cabin is finished in high-grade materials, customisable via Skoda’s range of Loft, Suite, Lounge, EcoSuite and Sportline trims. The overall layout feels familiar, but the climate controls remain hidden in the central infotainment display – frustrating if you want to adjust the temperature or fan speed on the move. 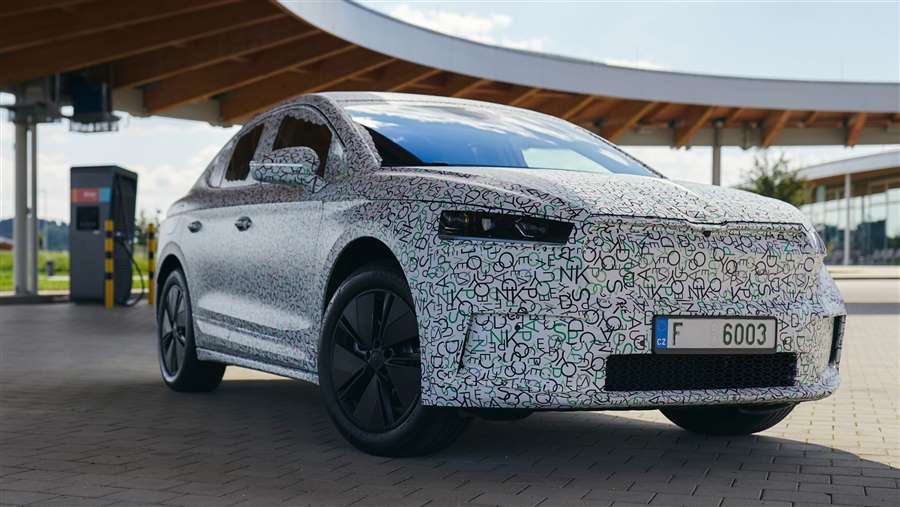 Prices and specs will be revealed alongside the full production car in December, but we expect the Coupe iV to command a circa-five per cent premium over the standard SUV, with prices from around £33,500.