There’s no doubt that the new Volkswagen Multivan is better than the old Caravelle in a number of key areas. There’s more space inside, the styling is up to date and the addition of a plug-in hybrid adds an extra layer of appeal for company car buyers and businesses. High pricing could be its downfall, however, and the launch range isn’t very strong. There’s also the eagerly-anticipated, similarly sized VW ID.Buzz, which might steal some thunder when it’s released next year. 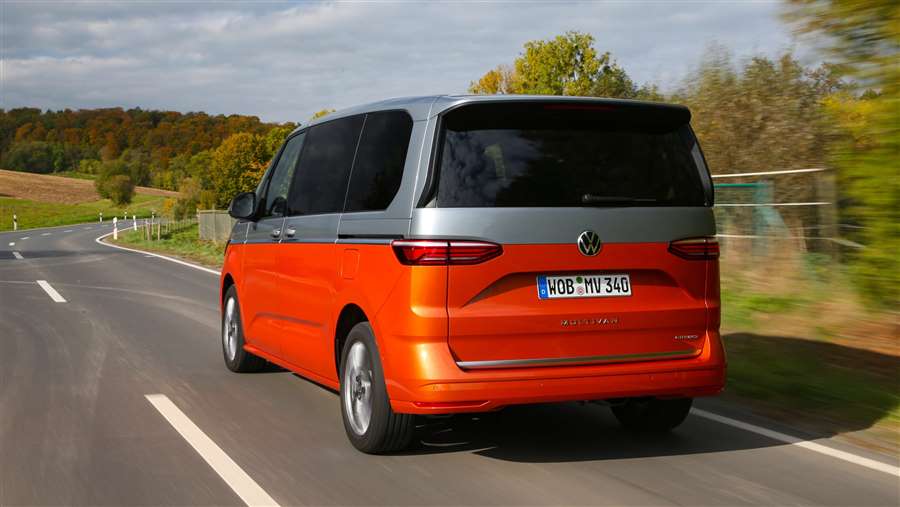 The new Volkswagen Multivan is under plenty of pressure to succeed, not just because it replaces the popular T6.1 Caravelle MPV (which will be sold alongside the newcomer for a while), but because it also brings in a new plug-in hybrid capability to VW’s van-based people carrier.

The twist is that the new T7 Multivan isn’t really based on a van. Instead, it runs on the MQB platform which underpins a wide variety of VW Group products like the Cupra Formentor and Volkswagen Golf. In theory this should make the Multivan significantly more engaging to drive, improving upon the van-like driving characteristics of the old Caravelle. From launch, all powertrains have a petrol engine - a 134bhp 1.5-litre TSI kicks off the range, then a 201bhp 2.0-litre TSI and finally a plug-in hybrid with a 1.4-litre TSI paired with a 10kWh electric motor for a total of 215bhp.

But the T7 Multivan is aimed at those transporting up to seven people, so it’ll need to impress passengers just as much as the driver. That’s where the new car’s party-piece rear seating comes into play. A rail system means the middle and back rows of seats can slide forwards and back or be turned 180 degrees independently of each other. To make the seat removal process easier, the seats are 25% lighter than the old Caravelle’s and on higher spec models the rail system is electrified, allowing for all seven seats to be heated. You can also spec the Multivan with just six seats and of course you can remove the rear and middle seats if you’d like to use the Multivan as a van.

There’s more good news for passengers as the central table can slide the length of the cabin, giving front, middle or rear passengers cup holders and a handy height adjustable fold-out table. Four USB ports are also available for rear passengers, with two up front.

On all models, the infotainment system is the same as you’d find on the new VW Golf and while there have been plenty of critics of VW’s menu layout, the 10-inch screen is crisp and the responsiveness of the touchscreen is among the best out there. With this central screen interface coupled with Volkswagen’s 10.25-inch ‘Digital Cockpit’ and head-up display, the Multivan does feel like a quality item from the driver’s seat. It’s also easy to switch between hybrid and EV-only modes with a dedicated button below the central screen. 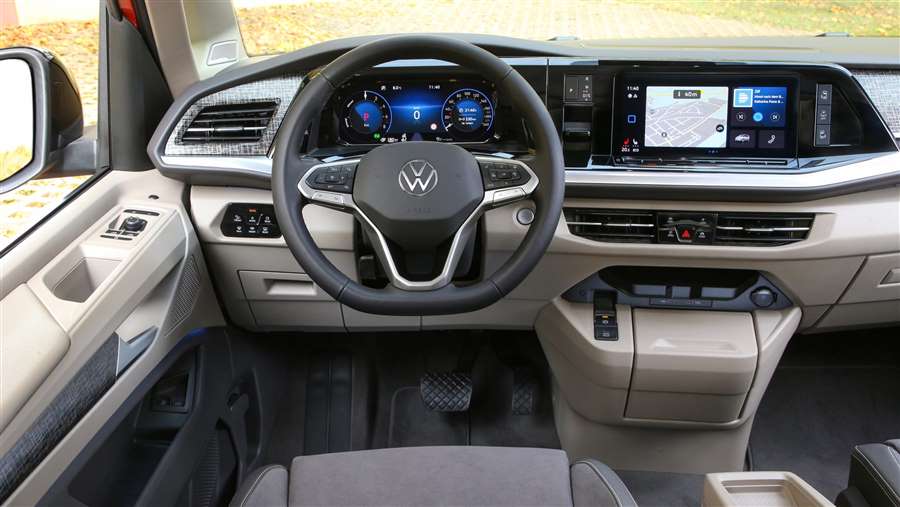 Crucially the Multivan offers more cabin space than the outgoing Caravelle, with 469-litres available in the boot with a seven-seat layout and 1,844-litres with the rear seats removed. Upgrade to the long-wheel base model and the total maximum with rows two and three removed rises to 4,005-litres from the 3,672-litres in the short-wheel base model.

Plenty of storage bins throughout the cabin is always useful in a car designed to take seven, although don’t be surprised to see the creviced rail system quickly fill up with food and muck if there are children, or messy adults, regularly on board. Touch points like the steering wheel and the dash have a premium feel to them but you also don’t have to search for long in the rear cabin area to find some cheap scratchy plastics.

You’d be forgiven in thinking the Multivan has taken a huge leap forward from the old Caravelle in terms of driving dynamics thanks to the MQB platform, in reality the Multivan still feels fundamentally like a van. There’s decent body control in the bends, despite the retention of the Caravelle’s old suspension set-up, but the steering is incredibly light and devoid of feedback.
On the flip side of this, the Multivan is manouvrable in town thanks to a tight turning circle, that light steering and excellent visibility. The positioning of the pedals and steering wheel does give it a slight SUV-feel and the seats themselves are just the right mix of supportive and comfortable. Road noise is well suppressed, although due to the boxy design, wind noise does become noticeable at motorway speeds. 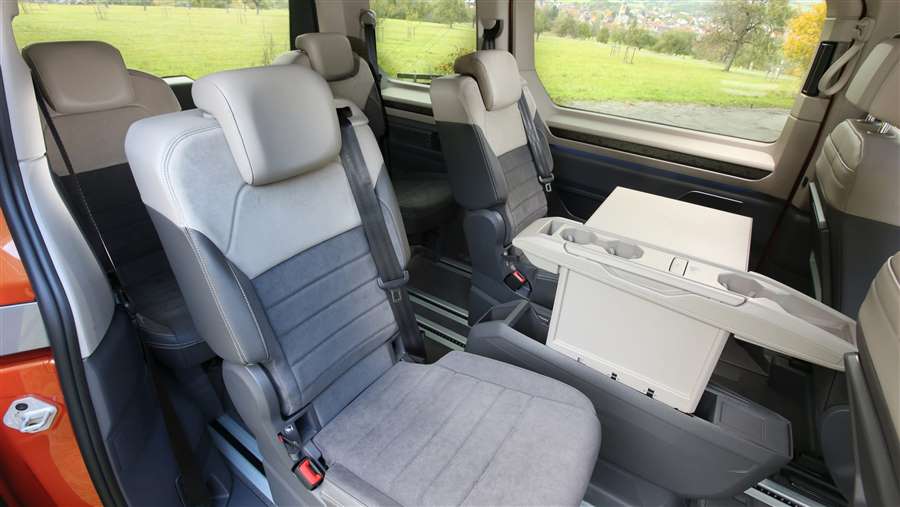 The range-topping eHybrid plug-in model comes with a 1.4-litre petrol TSI engine mated to a 10kWh battery. It’s the same unit found in the Golf and Passat GTE, so that means there’s a fairly hefty 215bhp offered through a bespoke six-speed automatic gearbox to the front wheels. 0-62mph takes 11.6 seconds and the Multivan eHybrid never feels as quick as the power figure suggests. The performance is adequate with this powertrain but never feels overly punchy. The power delivery is smooth but when the four-cylinder petrol engine decides to kick in you do get an audible clatter.

If you want to squeeze out the Multivan’s maximum fuel efficiency, then you’ll have to accept a 204-minute charging time from 0-100% using a 3.6kW charger. The 30-mile electric-only range is hardly groundbreaking for a modern plug-in hybrid either but in EV-only mode the Multivan is quiet, comfortable and the brake regeneration system is nicely weighted. 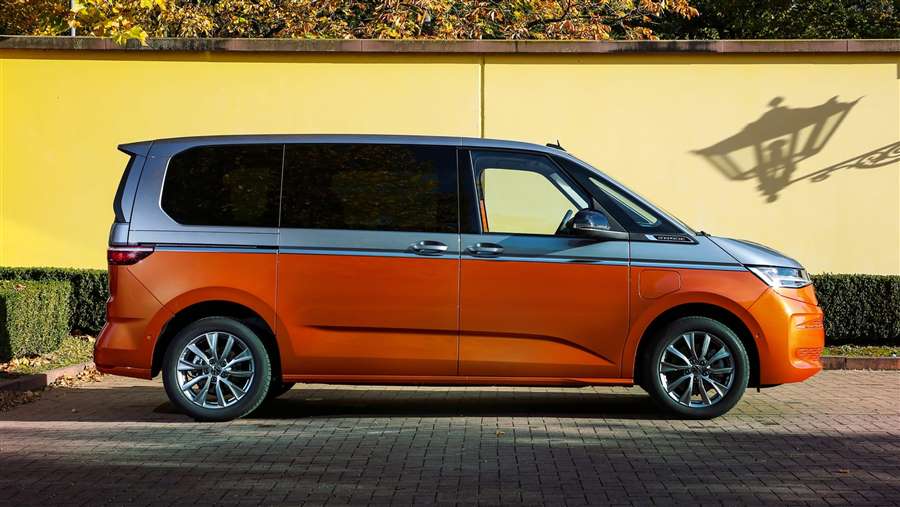 Out of the three powertrains available from launch (a 148bhp diesel variant is coming in Spring 2022), the eHybrid is the best suited to the Multivan’s chassis. The slightly heavier plug-in hybrid set-up actually gives the Multivan a more composed feel on rougher roads. In the 134bhp 1.5 TSI, the reduction in power means the seven-speed DSG gearbox found in the both non-hybrid models is more prone to unwanted kickdowns and ultimately holds on to revs just a bit too long.

VW is still yet to release a price for the new Multivan but expect the range to start from £45,000 for the non-hybrid versions, topping out around £60,000. The eHybrid plug-in model will be the most expensive, costing from around £55,000 when it goes on sale in January 2022. Rivals like the Citroen Spacetourer and Mercedes V-Class offer similar practicality, but without the option for a plug-in hybrid. So if you want an electrified people carrier of this size and you don’t choose the Multivan eHybrid, you’ll have to go the fully-electric route. Volkswagen will also have a new entrant into that category next year with the funky electric ID.Buzz that could further dent the new plug-in hybrid Multivan’s prospects.

Audi
Audi Q5 Sportback Review: As Practical as It Can ...